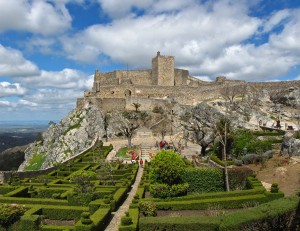 The castle is part of the Natural Park Serra de São Mamede, on the northern slope of the mountain, in a dominant position over the village and on the strategic line of streak, controlling in the past the crossing of the river Sever, a Tagus River affluent. This fact assured it the attention of several monarchs, expressed on several remodeling campaigns, which gave the monument its current appearance.

In the context of the conquest of Alcacer do Sal, D. Afonso Henriques  took the town from the Moors between 1160 and 1166. By the demarcation of the Castelo Branco Term in 1214  Marvão was already included in Portuguese lands. More important was that D.Sancho II  granted it a charter in 1226.

D. Afonso III  donated the lands of Marvão to the knights of the Order of Malta (1271), later on granted it to his son, Afonso Sanches, along with landlords of Arronches, Vide and Portalegre Castle.

For this reason, at the beginning the reign of D. Dinis (1279-1325), the town and its castle found themselves involved in the dispute between the sovereign and the prince D.Afonso been conquered by the forces of the sovereign in 1299. At the end of the matter, the fields of Marvão, Portalegre Arronches and were replaced by Sintra and Ourem, remaining the first held by the sovereign. This confirmed the Marvão’s charter in 1226 and embarked on its expansion and strengthening of defenses, especially the construction of the tower which began in 1300.

As were other 11th-13th-century castles, the early medieval improvements and development of Marvão castle reflect the innovations brought back by crusading orders from the near east (notably the highly influential Hospitaller castle in Syria, the Krak des Chevaliers). The medieval castle seen in Marvão today mostly post-dates the year 1299, and features numerous characteristics of a crusader-era castle: a tall central keep with raised entrance on the first floor; a series of lower, outlying turrets (some semi-circular); high-placed arrow-slits; open spaces to aid the sheltering and assembly of villagers and troops; a well, and huge rain-collecting cistern to supply water to both keep and the wider castle in the event of siege; bent entrances (both on the village and castle gates) to slow down invaders in the event of breached gates; a series of narrow killing zones (notably, in the triple gate on the village-side of the castle); extensive crenellated battlements and curtain walls that enhanced the natural defences provided by the escarpments of Marvão’s rock.

Was classified as a National Monument in 1922, by a decree on July 4th.

The Castle of Marvao is located in the village and parish of Santa Maria de Marvão, Marvão municipality, Portalegre District.