The Jews and Judiaria, in Castelo de Vide

The date of its founding is not known for certain, however, already in the 14th century there was a Jewish quarter in Castelo de Vide, which consisted of a set of houses built next to the castle’ main door.

The Synagogue is located at Rua Jewry / Fountain Street, the building is oriented towards east / west.

The entire assembly consists of a single volume, with two floors.

Commonly called “Synagogue”, but with the appropriate name of “BEIT-HA – midrash-SEFARDIN”.

Laws enacted by Lusitanian monarchs in order to create “Ghettos”, where only Jews lived, led to the appearance of neighborhoods, also known as the  Judiarias or “Jewish quarters”. 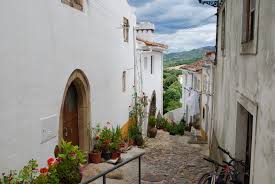 The Castelo de Vide Jewry occupied an area near the main door of the Castle, between the market and the Fonte da Vila. Extended through the medieval streets of the Source, the market, the Arçario, Jorge Mestre and Jewry, and by the current Street of Locksmiths and New Street.

In Castelo de Vide Jewry developed on the slopes of the village facing the east. Although established in one of the hilly areas, the neighborhood was crossed by a major axis castle communication with the outside and vice versa. The Jewish presence in Castelo de Vide left some material evidence that is especially relevant where the building is thought to have worked the Medieval Synagogue. Other buildings of the Jewry Street, Fountain Street or Ruinha Jewry also show that remains of the Jewish ancient tradition to mark their faith on their doorposts.

The establishment of the Inquisition and the publication of the Edict of Expulsion of the Jews from Spain realms by Ferdinand and Isabella, the Catholic Kings, contributed to the growth of the Castelo de Vide Jewry that keeps the place names of its streets the testimony of Jewish presence, but also the persecution of the Holy Office to the New Christians.