The earliest dolmens in southern Portugal date from c. 4800 BCE, and this culture lasted into the Bronze Age (2000 BCE) and beyond into the Iron Age. In and around Marvão, there exists a high concentration of dolmens, rock-hewn tombs, passage mounds and megaliths, dated to the 3rd millennium BCE. Together with the Sever-valley sites around the nearby towns of Castelo de Vide and Valencia de Alcântara (in Spain), these form one of the densest clusters of megalithic sites in Europe. Among the 200+ neolithic, Bronze and Iron Age monuments within a 25 km (16 mi) range of Marvão is the 7.15m high menhir at Povoa e Meada (the largest on the Iberian peninsula), oriented to be visible from the northernmost promontory of Marvão’s rock (possibly based on an alignment with the lunar calendar). Other notable sites are the Coureleiroscomplex of dolmens near Castelo de Vide, the Vidais dolmen (Castelo Velho) of Santo Antonio das Areias and the Las Lanchas dolmen complex of Valencia de Alcântara.

It is speculative to comment on the population of Marvão at this time. Many carved tombs and burial chambers dot the granite boulders of the landscape around Marvão, suggesting small-scale farming settlements, and some cultural emphasis on burial rites and the afterlife. Excavations of dolmens (e.g. the Cavalinhas dolmen) reveal fetal-position buried skeletons, and grave goods including weaponry (axes, arrowheads), jewellery (necklaces), ceramics and stone idols. Cave art and engravings in the Tagus valley (40 km (25 mi) north of Marvão: 40,000 items) point to a developed culture based on prehistoric norms of agriculture, hunting and transhumance. 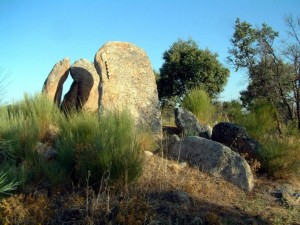 Further, ideograms  notably repetitions of spirals  point to both abstract ideas, religious observance, and some astronomical knowledge of lunar and solar cycles. Decorative objects – rock crystal arrowheads, floral and zig-zagged patterned stones (pedras de raio) and ceramics, deity sculptures  also suggest the development of local systems of craftsmanship, hierarchy, magic and celebration. Recent studies of idol plaques have speculated that they depict some kind of owl deity, with their engravings acting as a means to identify the individual buried by clan, marriage and lineage