Marvão and The Christian Reconquest 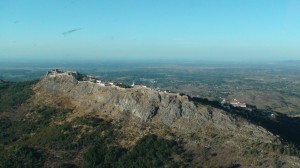 Following its conquest by Alfonso I in the 1160s, and its brief recapture by Almohads in the 1190s, Marvão’s situation remained fragile around the start of the 13th century: it was listed among Portuguese territories only in the termo of Castelo Branco in 1214. Marvão was a recently conquered outpost, that needed to be fully integrated into Portugal, and which stood on the edge of territories conquered by an expansionist Kingdom of León.

The process of Portuguesification began under the reigns of kings Sancho I and Alfonso II. Yet it was the famous Christian victory over the Almohads at Navas de Tolosa (near Jaén) in 1212 – leaving 100,000 Moors dead – that would effectively secure this area of south-western Iberia, and establish a lasting peace. The São Mamede mountains and Guadiana valleys now became a bridgehead from which the reconquista could make strong inroads into Almohad territory in the Southern Alentejo, Algarve, Southern Extremadura and north-west Andalusia.

Marvão’s role as fortress now became more important not as a Christian or Moorish outpost-against-the-infidel, but as a territorial marker for the young – and by no means militarily strong – state of Portugal against the competing Christian Kingdom of León. In 1226, Marvão was among the earliest towns on the eastern border to receive from Sancho II of Portugal its foral (i.e. royal charter, allowing the town to regulate its administration, borders and privileges).

Another aspect of 13th century statecraft that would bolster the area’s ‘Portugalidade’ (Portuguese identity) would be the settlement of planted Christian colonists from the north (Galicia, the Minho), southern France and Flanders in territories around Marvão. This was done with royal approval, and with the intermediation of the Templars and Hospitallers.

The resettlement of barren areas depopulated by centuries of warfare and bloodshed – or simply abandoned by fleeing Berber refugees – was vital to sustain the new Portuguese kingdom. Many of these settlers were Galicians, and the name of the hamlet of Galegos in Marvão is likely to refer to its 13th–14th century settlers. Other nearby settlements took names from southern France: in the nearby Templar-controlled village of Nisa (Nice), we find hamlets named Tolosa (Toulouse),Montalvão (Montauban) and Arez (Arles) to denote the origins of their settlers. 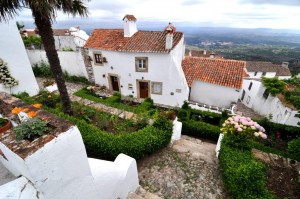 Perhaps the most important development for Marvão at this time was the donation of borderlands to the military orders. The Templars, strong allies of Alfonso I, had during the 12th century been given lands north of the Tagus, including their headquarters in  Tomar and Castelo Branco, Also given broad responsibility to secure the river passage . In 1199, Sancho I of Portugal awarded lands to the north of Marvão (the Herdade da Açafa).

These extended across the present-day districts of Castelo de Vide and Nisa and into territories near Valencia de Alcántara that now lie in Spain. In 1232, Sancho II of Portugal donated further extensive domains south of the Tagus around Marvão and Portalegre to the Knights Hospitaller, along with the duty to fortify the frontier and help in its repopulation. The Hospitallers would dominate the administration of the region for two centuries, moving their Portuguese headquarters from Leça in Northern Portugal to nearby Crato in 1340.

Much of the architecture to be admired today in Marvão can be attributed to the guiding hand of the Hospitallers in extending the castle and village in the 13th-15th centuries. Hospitaller (Maltese) crosses can be seen on houses throughout Marvão’s walled village, including the door of the church that is the Municipal Museum.