Portalegre the capital of north Alentejo

Portalegre is located in one of the flanks of the Serra of  São Mamede , which is a mountain range with a wide variety of fauna and flora, considered Natural Park. Here, you can find  deer, wild boars and eagles in the forest of chestnut and oak trees.

This wealth makes Portalegre for the natural heritage and nature conservation, with considerable environmental quality.

The town of Portalegre is the capital of Portalegre district, with about 15,800 inhabitants. Soothes of a municipality with an area of ​​446.24 square kilometers, is divided into 10 parishes.

Portalegre was inhabited in prehistoric times and is of Roman origin, with beautiful houses from the Renaissance and the Baroque period.

It was John III which raised Portalegre to city status in May 23, 1550.

On July 18, 1835, Portalegre becomes the capital of the district.

For lovers of the human manifestations, Portalegre has several interesting buildings:

- Castle of Portalegre – located in the parish of the Cathedral, city and county Portalegre.  Great place from where was possible to defended  Alentejo front  Castile. It creates an interesting chromatic contrast with the dark and the walls white lime houses 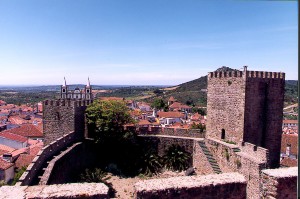 - The Cathedral – This is a temple dedicated to Our Lady of the Assumption, which  construction began May 14, 1556

- The Municipal Museum – has a considerable estate especially coming from two ancient convents of Portalegre, Santa Clara and St. Bernard, as well as private donations;

- The House Museum Jose Regio – In this poet’s collection there is a place of choice for the simple things in popular art, where coexist sacred art pieces from rural everyday

- The Municipal Library, The Santa Clara Convent- Is the second oldest monastic establishment of Portalegre. Its foundation dates back to the second half of the fourteenth century, more specifically the year 1376.

To enjoy the natural heritage is at all advisable to carry out walking routes in the Natural Park running through the county. There are several walking routes:

- The Carreiras route of pedestrian ;

To carry out both routes, there are flyers with the route explanation despite it is marked on the ground.

There are also viewpoints from where you can enjoy the rich landscape:

- The Penha Viewpoint, located in the Serra da Penha;

- Pico de S. Mamede, located 1025 meters above sea level, the highest point of the Portuguese mainland, south of the Tagus. Here you can enjoy the Dam Apartadura, the village of Marvão, the Serra da Estrela and part of the Spanish Extremadura. Very interesting from the perspective of geology, has limestone and quartzite, greywacke and shale, which provides different soils;

- The Viewpoint of  Nossa Senhora da Lapa, a small church carved in the rock with an amazing view of the Natural Park .